DANNY FINGEROTH is the author or editor of numerous highly-regarded books about comics. 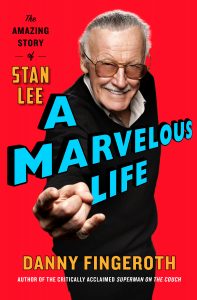 Danny’s newest book, published by St. Martin’s Press, is the definitive biography of the beloved—often controversial—co-creator of many legendary superheroes, Stan Lee. A Marvelous Life: The Amazing Story of Stan Lee presents the origin of “Stan the Man,” who spun a storytelling web of comic book heroic adventures into a pop culture phenomenon: the Marvel Universe.

Stan Lee was the most famous American comic book creator who ever lived.

Thanks, especially, to his many cameos in Marvel movies and TV shows, Lee was—and even after his 2018 death, still is—the voice and face of comics and popular culture in general, and Marvel Comics in particular. How he got to that place is a story that has never been fully told—until now.
With creative partners including Jack Kirby and Steve Ditko—with whom he had tempestuous relationships that rivaled any superhero battle—Lee created world-famous characters including Spider-Man, Iron Man, the X–Men, the Avengers, and the Hulk!

But Lee’s career was haunted by conflict and controversy. Was he the most innovative creator to ever do comics? Was he a lucky no-talent whose only skill was taking credit for others’ work? Or was he something else altogether?

Danny Fingeroth’s A Marvelous Life: The Amazing Story of Stan Lee attempts to answer some of those questions. It is the first comprehensive biography of this powerhouse of ideas who, with his invention of Marvel Comics, changed the world’s ideas of what a hero is and how a story should be told.

With exclusive interviews with Lee himself, as well as with colleagues, relatives, friends—and detractors—Fingeroth makes a doubly remarkable case for Lee’s achievements, while not ignoring the controversies that dogged him his entire life—and even past his death. With unique access to Lee’s personal archives at the University of Wyoming, Fingeroth explores never-before-examined aspects of Lee’s life and career, and digs under the surface of what people thought they knew about him.

Fingeroth, himself a longtime writer and editor at Marvel Comics, and now a lauded pop culture critic and historian, knew and worked with Stan Lee for over four decades. With his unique insights as a comics world insider, Fingeroth is able to put Lee’s life and work in a unique context that makes events and actions come to life as no other writer could.

Despite F. Scott Fitzgerald’s famous warning that “There are no second acts in American lives,” Stan Lee created a second act for himself that changed everything for him, his family, his industry, and ultimately for all of popular culture. How he did it—and what it cost him—is a larger-than-life tale of a man who helped create the modern superhero mythology that has become a part of all our lives.

Click here to learn more about and to buy A MARVELOUS LIFE: THE AMAZING STORY OF STAN LEE now! His 2012 book—co-edited with the legendary ROY THOMAS—is THE STAN LEE UNIVERSE, the ultimate repository of interviews with and mementos about The Man who co-created Spider-Man, the X-Men, and so many other immortal characters!

Much of the material in this beautifully-designed book is rarely or never-seen material from THE STAN LEE ARCHIVES at the University of Wyoming. The STAN LEE UNIVERSE is a must-have treat for anyone interested in popular culture, comics, Marvel—and, of course, the inimitable STAN LEE.

Raves for THE STAN LEE UNIVERSE:

“About 50 years ago, Stan Lee began to revolutionize the way comic books were published, and soon he was presiding over an alternate reality, way more exciting than our own, where amazing heroes do incredible deeds. Want a tour? Danny Fingeroth and Roy Thomas are excellent guides.”
– DENNIS O’NEIL, legendary writer and editor of Batman and many other characters

“The Stan Lee Universe, collects decades’ worth of Lee’s greatest archives, from his notes on the creation of the Fantastic Four to radio interview transcripts to his interactions with luminaries of film, music, and pop culture. It’s a mind-bending trip through comics history, a treat for all true believers…a compulsively readable document for any comics fan.”
– JOHN HOGAN, graphicnovelreporter.com

“The back of the book calls this ‘The Ultimate Vault of Lee-Rarities,’ and that’s easy to see why. You get rare interviews with Stan, interviews about Stan, correspondence between Stan and scads of people (including James Cameron and a polite but cool non-rejection letter from Stan’s secretary to Oliver Stone in 1973), some projects that never saw the light of day…the list goes on and on. Some high points: info about the screenplay Stan wrote for director Alain Resnais (!) and a transcript of a radio interview with both Lee and Kirby. There’s something on every page that is soaked in awesome.”
– JOHN ROBINSON, needcoffee.com

Click to learn more about and to buy THE STAN LEE UNIVERSE now! SUPERMAN ON THE COUCH has become the definitive book on why we love superheroes, written from Danny Fingeroth’s perspective of a highly accomplished superhero comics writer and editor. In this book, Danny explains why, in modern society, superhero culture has become the metaphorical prism through which we see—and live—our lives, and why superheroes have become potent myths for our times in movies, TV, and games, as well as in their birthplace, the comics.

“Danny Fingeroth has produced a readable and socially insightful consideration of the superhero. His analysis of society’s solution to its dissatisfaction with the protection provided by standard law-and-order systems makes it important and current.”
– WILL EISNER, creator of The Spirit, and inventor of the modern graphic novel

“Danny Fingeroth has written an important book that serves to adequately defend superhero comics against the charges of being either simple adolescent, male power fantasies, or, for that matter, perverted escapades intended to corrupt the minds of young readers everywhere, that have been leveled against them over the years. Fingeroth recognizes, and at a number of points well demonstrates, that superhero comics are, indeed, important cultural artifacts that deserve our critical attention….this book is recommended.”
– Image Text, Vol. 2 no. 2, Winter 2005

“Fingeroth draws on his decades of working at Marvel Comics (including work as the editorial director of the Spider-Man comics family) to write this personal, engaging, and earnest work. He addresses, among other topics, superheroes and immigration (Superman, the ultimate alien), superheroes and family relations (Fantastic Four and X-Men), and the development of the teen voice in comic books (from sidekick to Spider-Man)… The result is an easygoing exploration of superheroes’ culture significance, and it will appeal to a mainstream audience.”
— Library Journal

Click to learn more about and to buy SUPERMAN ON THE COUCH now! “Like a Yiddish theater play on the old Jewish Second Avenue, or like a really good comic book, Danny will make you laugh, cry and, best of all, he’ll make you think.”
— From the foreword by STAN LEE

“Not only do comic book superheroes Batman and Superman disguise themselves to save the world, but, according to former Marvel group editor Fingeroth, they also disguise their Jewish heritage and values. [Fingeroth] uncovers Jewish themes in comics history, starting with the introduction of Superman in 1938 and ending with a look at what the current crop of Jewish mainstream comics creators are doing with the freedom to explore overtly their religion. Chronicling the creation of each new ‘Jewish’ superhero, Fingeroth notes the concurrent changes in the comic industry, including the audience shift from children to adults and the effect of comic critic Fredric Wertham.

“Looking back at the gold and silver era of comics, he uses close reading and artist testimony (Stan Lee, Joe Simon, and Will Eisner among them) to explore parallels between Superman and Moses, Spider-Man’s morality tales and the Torah, Fantastic Four arch-nemesis Hate Monger and Hitler, and others.”
—Publishers Weekly

“Danny Fingeroth’s Disguised as Clark Kent…should be a key book for students of the superhero genre.”
—Peter Sanderson, Comics in Context

“Disguised as Clark Kent: Jews, Comics, and the Creation of the Superhero comes from a comics industry veteran who explores the backgrounds of famous superheroes and their creators – who, as it turns out, were largely young American Jewish men from Eastern European backgrounds. The focus on the hero icon in history, Jewish history and culture, and the comics industry as a whole thus makes for a strong recommendation not just for Judaic studies collections, but for any collection strong in either comics or cultural icons and analysis.”
—Diane C. Donovan, Midwest Book Review, January 2008

Click to learn more about and to buy DISGUISED AS CLARK KENT now! The Rough Guide to Graphic Novels is the ultimate companion to the expanding world of the “literary comic book”. Written by comic industry insider Danny Fingeroth, it includes the mediums history, from sequential art in Egyptian tombs, through the superhero boom of the 1940s to the birth of the graphic novel movement and the latest online offerings. All you need to know about the best and rest with 60 must-read graphic novels, including the genre-defining Maus and A Contract with God, plus modern classics-in-the-making Fun Home and Alice in Sunderland. The guide profiles the movements legends including Harvey Pekar, Chris Ware, Denis Kitchen and other amazing illustrators, writers and publishers who’ve helped win respect for this once marginalised art form. And everything else you need to know from “how to make a graphic novel” to Persepolis and the latest film and television offerings, manga, documentaries, conventions, books, magazines and websites.

“I’m not very knowledgeable about the world of graphic novels and wanted to become more literate. I trust Danny Fingeroth because of other fine books of his I have read. For me the concepts and examples are clear and the book creates one intelligent map of a very large territory…And somewhat uniquely, the book contains its own 30 page graphic novel, “For Art’s Sake’ with fine drawing by Roger Langridge. Or maybe I should say meta-novel, since the novel is about the challenge of creating graphic novels out of life experience.”
–John Shelton Lawrence, co-author of The American Monomyth

Click to learn more about and to buy THE ROUGH GUIDE TO GRAPHIC NOVELS now!